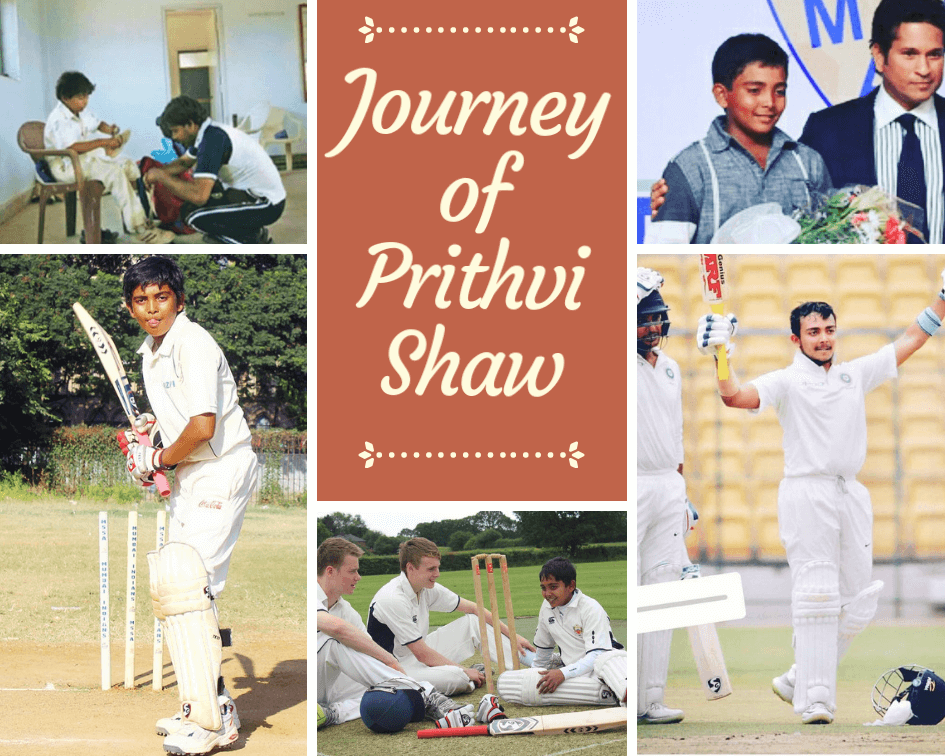 In a nation of 1.3 billion people, you will hardly find an individual, who does not watch or support cricket. Such is the impact of the sport in India that cricketers are more than just icons; they are worshipped like gods. With such a vast population crazed about the sport, there is a kid in every corner of every street that dreams of representing the nation one day and bringing laurels.

Among those kids who dreamt big once was young Prithvi Shaw, a batsman with the caliber to emulate the legends that have taken to the pitch before him.

The journey of Prithvi Shaw to Indian Cricket Team

It was in 2013, when he first hit the headlines, for a scintillating knock of 546 off 330 balls in a school match. Since then, the hard-hitting batsman’s career has only seen an upward trajectory. 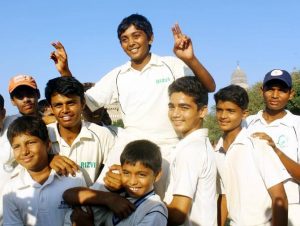 Today Oct 2018, he is still a teenager, but in his professional career, there is more to just his age than meets the eye. At just age 18 the youngster has already made his test debut for India, becoming the youngest Indian to make his debut after the legendary Sachin Tendulkar, to whom young Prithvi has been often compared to.

But this is not the news that is making the headlines.

Prithvi Shaw became the youngest Indian to score a test century on his debut match. In just the only match he has played for India, he has already earned a ton of plaudits and acclaim for his superb performance which helped India win the first test match against West Indies.

The very spark that we saw light up the 14-year-old back in 2013 was on full display when he took to open for India, thus assuring fans of a new phenom in the making.

How has he risen to such ranks at such astonishing speeds? – From 3 year old kid to mumbai U-16 captain

Prithvi is like any other budding cricketer in India, hardworking and diligent in his practices, but the one thing that separates him from others is the sheer amount of skill that he has. When he takes to the pitch, you can see a mastery of the art of batting on full display.

This journey like any sporting story has a humble beginning; it all started when he was just 3 years old. At a very early age, he had lost his mother, and he never had the privileges which the other kids of his age had.

The harsh realities of life hit him and this became a sort of forge where Shaw honed his temperament and mind set. It was his father who identified the talent his kid had and saw in him what he could once have been.

Naturally, his father pushed him to pursue the sport and knew that despite all the financial difficulties, the prodigal son would make it in the cricketing world. He even sold his small garment shop in order to help his son chase his dreams. 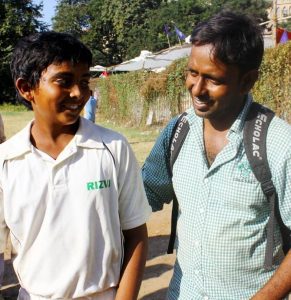 The routine was gruelling for both of them, but in the end, they knew what they had to do in order to make it. Every day began at 4:30 am, to take the 6 am local to Bandra, Mumbai. With a school bag in one hand and the kitbag on the other, they made their way to the famous MIG ground, where once Sachin Tendulkar used to be a regular during the latter half of his illustrious career.

The hard work that the father and son had devoted soon started to pay off, as Shaw was starting to get noticed by scouts and other regulars. He was fast becoming a familiar name in the Mumbai Maidans (Grounds).

He started scoring runs at every level of cricket, and his demeanour along with his steadfast nature was on display when he faced bowlers from the senior club teams.

The popularity and his prowess with the bat, helped him get selected to the Bandra based Rizvi Springfield, a powerhouse in Mumbai School cricket.

First remuneration as a cricketer

It was no overnight journey, and it took nearly seven years before anybody even noticed his talent. It was in 2010, the 11-year-old received his first remuneration as a cricketer when Nilesh Kulkarni, a former Mumbai and India, left-arm spinner, and his sports management firm offered him an annual stipend of 3 lakhs to pursue the sport.

A local corporator also came to the aid of Prithvi and his father, offering them a flat in Santacruz to help reduce their travel time. All of these things became possible after they had seen the youngster wield his bat like a weapon.

It was during his time at Rizvi that comparisons to Tendulkar were first drawn. His sheer ability to hit the ball at the top order was unmatched in his time at the school. The comparisons were often called premature, and there were sceptics, but he silenced everyone with his performances day after day.

He was even courted by Julian Wood a former Hampshire cricketer who witnessed a very prodigal Shaw hit 73 runs against his academy as a nine-year-old. Eventually, after a few years, Prithvi finally agreed for a stint at his academy, where he justified Wood’s pursuit by scoring a century on debut in Manchester. In his two month stay at the academy, he racked up an incredible 1,446 runs. He was even invited to play with senior boys and featured in the second XI of the Gloucestershire team.

It was when he returned home, that he hit that infamous knock of 546 and thus leading him to take up the captaincy of the Mumbai under-16 team. From this point on, his journey simply skyrocketed to the top. 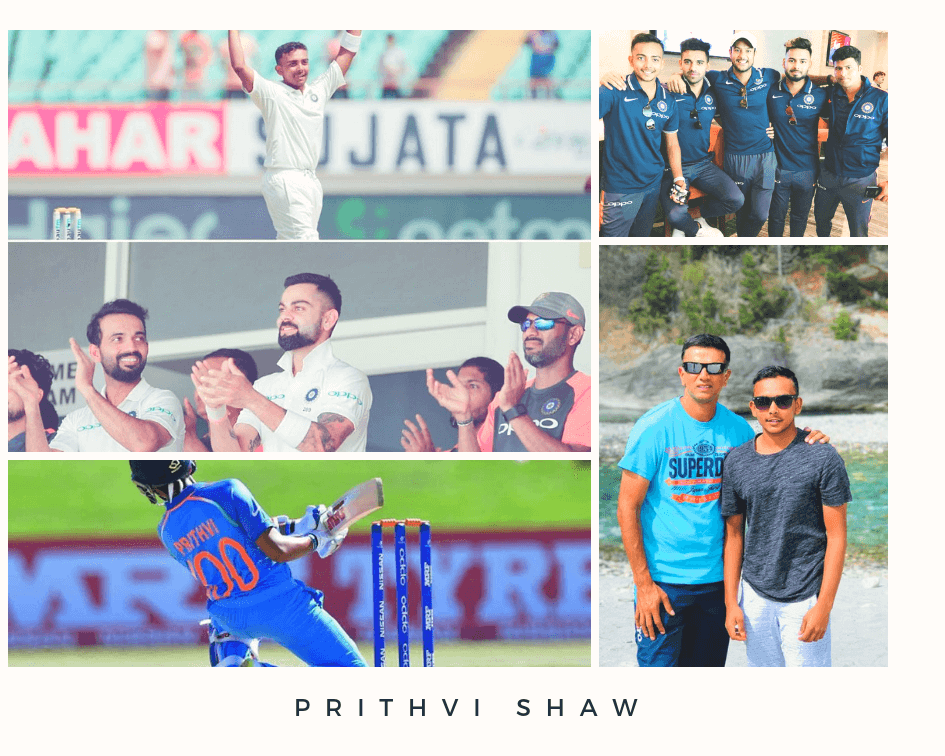 In November of 2016, he was named as a part of the India U-19 team, which won the youth Asia Cup in Sri Lanka.

Just two months later and Shaw made his Ranji Trophy debut in a semi-final match nonetheless, against Tamil Nadu. In the match, he scored a crucial second innings century, which helped Maharashtra snatch victory from Tamil Nadu.

In the domestic season that followed, aged 17, Shaw became the youngest player to score a century on his Dileep Trophy debut. A record had been shattered, which was previously held by the one and only Sachin Tendulkar.

Since then he has scored 4 centuries in his first 5 First-Class matches. He has also led the India U-19 team to another World Cup triumph in 2018, where he bloomed under the guidance of Indian batting legend Rahul Dravid.

The success of his team in the World Cup in New Zealand followed with him being picked up IPL team Delhi Daredevils in the 2018 auction for a whopping 1.2 crores (120million) Rupees.

Shaw, meanwhile, went on to score 4 centuries in his first 5 First-Class matches. In 2018, under the watchful eyes of Rahul Dravid, he led India to a title triumph in the Under-19 World Cup in New Zealand.
It was followed by a 1.2 crore IPL contract by Delhi Daredevils in 2018 auction.

His impact was immediate and quite unexpected to the franchise. The Delhi team had players like Gautam Gambhir, Colin Munroe and Jason Roy, who were accomplished players of the sport and were slated to be playing ahead of Prithvi. Yet, the youngster emerged as the most consistent of the bunch and managed to lead his team to victory on more than just one occasion.

This helped him get a much-deserved selection to the Indian Test team, which came as a shock to many and left journalists baffled as to how the selection committee managed to select someone so young. All of the doubts got quashed once the batsman took to the pitch and smashed a century on his debut.

Many a coaches and analysts have compared him to cricketing greats, but the youngster remains adamant on finding his own niche, and other patrons of the sport such as Sourav Ganguly and Gautam Gambhir agree too. They feel his game is too raw and needs improvement, and the youngster agrees with such insight and is looking forward to adding a few small adjustments here and there.

In a country which has produced some of the greatest batsmen in world cricket, such as Sunil Gavaskar, Sachin Tendulkar and Virat Kohli, Prithvi Shaw is next in line, and his recent performances are only a glimpse of what is to come. The future for Indian Cricket seems to be quite bright, with a talisman such as Shaw ready to fire on all cylinders and lead the nation once the reign of the current batting great Virat Kohli is over.